Another American Dreamer
By J.B.Blocker 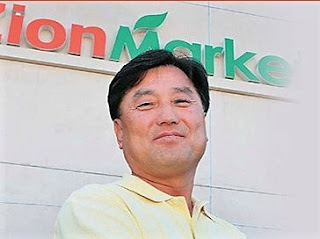 Kyu Hwang, pronounced Q, was 25 when he completed his 3-year service as a Corporal in the Air Borne Division of the South Korean Army.
Along with his father, mother, and sister, the Christian South Korean family found sponsorship to the U.S. and a brighter future. In their homeland, they were among the very poor and like many of that time, the American dream was freedom of religion and the opportunity to find work. And work he did!
In 1978, the family arrived in San Diego. The family spoke little English and Kyu began working in the back of a kitchen washing dishes. He worked many jobs and many hours over the next three years including becoming an insurance agent for New York Life before his opportunity to make his own path presented itself in a little empty building in San Diego. The growing local market demand for Asian produce welcomed the addition to the community.

Zion: A Biblical term for The Promised Land


Zion Market Center 1 is now occupying a 100,000 sq. ft. The Zion Market itself takes up 60,000 sq. ft. and employs over 120 full-time staff. Its annual revenues exceed $38 million dollars!
The other 40,000 sq. ft. holds 38 other vendors and professional services with revenues of around $12 million dollars.
This Korean Center has been a welcomed fixture in San Diego supporting the vast Asian community that has grown around the Naval port. The years of servicemen spending tours of duty in Asia has created a warm reception for Asian cuisine and a growing and welcomed comfortable relationship with products of the Asian culture.

San Diego has a 2018 population nearing 1.5 million and over 15% of the residents are of Asian descent.
The same can be said of Texas and the tens of
thousands who have deployed to South Korean and then returned with warm feelings, new friends, spouses, and a developed taste for Korean BBQ, Sushi, Pho, Sweet and Spicy Thai, and a world of other delights. The military comes back from Asia with new respect and comfort with the growing Asian influence in American culture.

The Hwang family has now grown their original Zion Market from a 2000 sq. ft. grocer to Six Market Centers across the United States.
Along with his sons Kevin and Moses, Kyu has spread his Patriotic and Christian values generously in each of his developments which now include San Diego, two Irvine locations, Buena Park, Los Angeles, and Atlanta in 2017.
Six current Zion Market Centers occupy over 270,000 sq. ft, employ well over 700 full-time staff and generate over $200 million dollars of revenue.

The family goal is to promote a deeper understanding of the Korean and Asian culture with the freshest and greatest variety of foods, produce, and household goods at the most competitive prices.

K&M Distribution was formed to efficiently distribute produce and goods to the growing family of Zion Markets. This has also enhanced their ability to provide more competitive prices, freshness control, and more goods and services.
Along with the Zion Markets, the family has also developed a highly successful Commercial Laundry Service that began with the first-year revenue of over One Million dollars with 50 employees.
Gowiwi International Inc. is another success story importing steel palates for companies like Samsung, LG, and U-Line.
His oldest son, Kevin oversees the only privately-owned County Club in San Diego County. Carmel Mountain Range Country Club Event Center respectfully nurtures their relationship with the over 640 property owners in that development.
When I asked Kevin to describe his family’s success, his answer was not what I expected.
“My father is a devoted Christian. Everything he does is with the thought that this is God’s money and he has been honored to be the steward!”
I asked Kevin about a mission trip his father mentioned. His response, “I can’t keep up with his mission trips. He learns about an opportunity and he goes. He has always been like that.”
A man who came to America with little money and less English now moves easily across the United States with a genuine smile and a warm and giving heart.
Kyu is an American Dreamer who lives and shares his faith and love of God, Family, and Country along with his successes where ever he goes.