Their volunteers are real heros.

You Too Can Bring Change 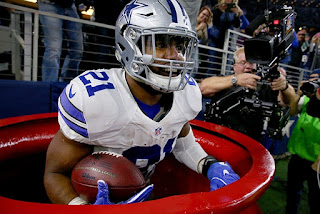 Ezekiel Elliot didn't seek out that Salvation Army bucket. It was right there in front of him and he didn't run around it nor did he try to avoid it. He jumped in feet first. In that one moment, he changed the perception of thousands of people who also jumped in to motivate hundreds of thousands of dollars in donations.

By J.B. Blocker
I used to feel uncomfortable about passing Salvation Amy ‘Bell Ringers’ everywhere I would go during the holidays.     It’s not that I am ambivalent about giving. But I am discerning about who I am giving to and how the money will be used. And one other thing… I feel that giving is not seasonal.
That all changed when I answered the call and found myself working in the ‘Red Zone’ of Ground Zero on September 24th as a Disaster Recovery Supervisor.

Now, I look for Bell Ringers. I am grateful to each and every one of them for the time they are taking and the effort they are making for a calling that is bigger than most of us know.
From the first time I stepped into the Salvation Army’s Main Supply and Support area located just outside of the Century 21 building and in front of the burnt-out remains of Buildings 4 and 5 of the World Trade Center complex, I was a believer, fan, and supporter. Before I knew it, some ‘Proud to be Cajun’ was handing a strong cup of coffee and offering me a Po’boy.
I left New York a few months later with huge respect for the work of the Salvation Army and enduring love for the staff and volunteers I have met along the way. Were ever I follow disasters from coast to coast, they are there with giant hearts to go with well-prepared teams.
One friend I made as soon as I returned to DFW is Pat Patey, a long-time S.A. Executive. We have stayed in contact over these past 17 years. Recently I told him a story I had not shared. I immediately realized it is a story that must be told.
I was reminded of it during a Bible study about serving humbly. Mary the sister of Martha and Lazarus washed the feet of Jesus and dried them with her hair. You can find that story in Luke 7: 36-50.
Also in John 13: is the story of Jesus washing the Disciples’ feet.
Both Bible lessons came together for me in the guise of a Salvation Army volunteer within a few short days of my arriving at Ground Zero as a Cat Super. Cat for Catastrophe!

ANGELS come in many forms

My daily journey to the Red Zone began at the Roosevelt Hotel in Mid-Town Manhattan on 45th and Madison Ave. I would walk the two blocks to Grand Central Station and then take the IRT Lexington Avenue line 4/5/6 to the nearest exit to Wall Street.
When I first got to New York the subway line was only opened to the Brooklyn Bridge and I would walk to Broadway and Wall Street. Soon the Fulton station was opened and by December we could ride the line to Wall Street. 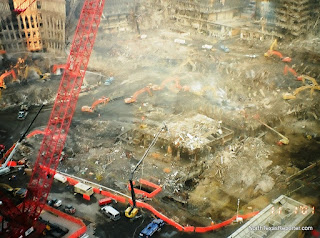 Day One: I can clearly remember the moment my head reached the ground level as I walked out of the Brooklyn Bridge stairway. I could immediately smell the lingering dusty smoke and see a light haze. By the time I had passed the city hall and the great St. Paul’s Chapel, about a ½ mile from my security entry, the smells took on a new weight and texture. This was less than 2 weeks after 9-11. The smoke was still billowing out of crevices in the Red Zone. The air began to thicken as I got closer to Wall Street. I began to curse my culinary skills for taste and aromas.
As I passed Fulton the dust became a looming shadow that carried the haunting flavors of crushed concrete, burnt furnishings, and the diesel exhaust of hundreds of big rigs, cranes, and the endless line of dump trucks.
It was at Broadway and Wall Street that a sickeningly sweet taste of decomposition became clear and ever invasive. For the rest of my time on duty, I always chewed gum or tic-tacs or peppermint lifesavers. The tastes are gone but not the memories.
I learned a lot of valuable lessons to be sure on those long walks to and from and in between work and rest. But one lesson that I learned far too late was to take better care of my feet. It took a few days before I realized that wearing tennis shoes to and from work was exceedingly preferable to my brand-new steel-toed boots!
For the first two days, I was so overcome by the wonder and awe of the unimaginable wreckage and the huge task ahead that I wasn’t aware of the rubbing on my heels. By the end of day two, I had walked a few miles and climbed many stairways in perimeter high rises without the benefit of elevators. My heels were blistering and I had grabbed some Band-Aids that night at a drug store.
On the morning of my third day, the tops of my toes and both sides of my feet were beginning to blister. I was supervising a recon team at World Finance Building II on the 38th floor when a bomb alert was called on my walkie. I gathered my crew spread on two floors and we ran down the stairs with a hurried determination. My friend had a team on the 50’s working their way down and as I ran recklessly down the stairs a few harrowing thoughts ran with me.
“Were we running down the wrong side of the building stairways? Was the threat above or below us? Would my teammates on the ’50s make it? These are all thoughts that meant life or death to those in the Twin Towers on 9-11.
By the time we had gathered outside the building and everyone was accounted for the pain in my feet was unbearable. I had to take my boots off. My socks were bloody and as I carefully, painfully slipped off my socks I saw the skin was dangling off my heels. The top of my arches was raw. As I moved down to my toes I could see the giant blisters on the side of my toes were on the verge of exploding. Finally, the socks were off and I could see the hide rolled back on the tops of my toes where the steel cap of my boots end.
My feet were a wreck and I had just begun my job. This was a personal disaster and challenge!
A side note as to the reason we were running down dozens of stairs in fear for our lives:
One of the support crew had walked into an office of a major accounting firm and seen what turned out to be a gag gift type of 3 sticks of dynamite and a faux clock timer sitting on a desk. He immediately ran to a supervisor and reported a bomb. This set off the all-out evacuation alert.
Before 9-11, I am sure that no one thought anything about the fake dynamite bomb. After 9-11, perceptions had changed.
On one ride from work, I was trapped in a full subway deep in the tunnel. The cars had been stopped because a woman had dropped a makeup compact at the station and someone had yelled out Poison! which shut down the entire line! I helped lead frightened, sobbing, and in some cases, delirious people out of the cars as we walked down the dark tunnel beside the train toward the nearest exit. New York was in a state of readiness to panic! 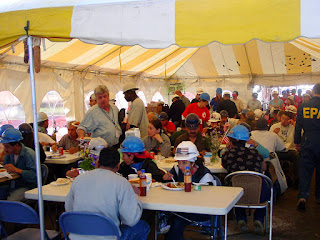 So, now my feet are mush and I see the Salvation Army supply tent across the way. I know they have all kinds of supplies there. On my first day, I had cut myself on some glass embedded in a wall and they had bandaged me up. The tent was fully stocked with not only food and beverages, but also clothing, all kinds of pain relievers, eyewashes, sinus meds, band-aids, candies and snacks, liquids of all brands, and coffee by the gallons.

This was the station that served only the ones with security passes into the Hot Zone. The Red Zone! It served all the drivers of heavy equipment, the National Guard, the fire and police, the government staff, and hundreds of us who were dealing with the damaged but still standing perimeter buildings. 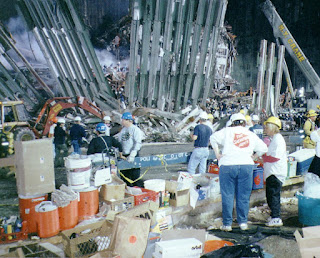 It didn’t really sink in until a was reassigned back to the Red Zone a week later. I went to the tent and asked around but a whole new group was working the tent and no one knew Sandy. I tried to remember which building we stopped at but I hadn’t paid attention. I never saw her again.

As I look back, I realized that for a few days a multi-millionaire volunteer for the Salvation Army had humbled herself, gotten down on her knees, and nursed a stranger insistently without ever bringing attention to herself.
I returned to Dallas and in a very short time, met the McKinney director, met the DFW leadership, and have loved and supported the Salvation Army and their Bell Ringers every holiday season.
Some of the bell ringers receive a small stipend from the proceeds. They deserve it! Some are well off enough to not need some extra money during the Christmas season. For whatever reason, they stand out in the cold and wind and rain and it doesn’t matter to me. Because I know first-hand that the proceeds fund 1st Responder tents for supplies and support. 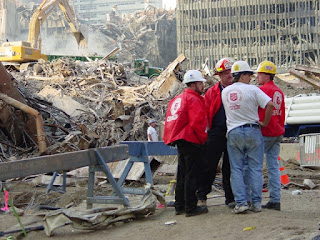 Disasters are everywhere and come in all shapes and sizes. The Salvation Army is there too.
Whether they wear Santa suits or fur coats to ring those bells and raise money and awareness, the money will be well spent.  I know that within hours of those commercial airlines crashing into the Twin Towers, the Salvation Army was there. I met groups from all over this great county showing up for days to feed, support, and care for the 1st Responders.
My lesson for you is to honor those who ring those bells and find your own way to be a part of something that is Tangible, Real, Rewarding, and much bigger than a few dollars or a few hours.

RING THOSE BELLS and BRING CHANGE