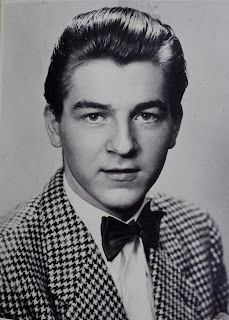 On March 31st, Chef Ewald Scholz saw his 86th birthday. With that, his pain and suffering of the past two years ended. His son Brian was able to be with him. Throughout this last great battle, even through the sickness of chemotherapy the pain in his bones and muscles were at times blinding. But he added a step to his gait and made his rounds. He would leave chemo to attend a chef's luncheon and stand straight and true as if he hadn't anything but joy and love.
Many didn't realize the struggle because he masked it so bravely. The great man was driven by a need to squeeze out every opportunity to pass on his spirit to the culinary world of Dallas. A world he gave all to. 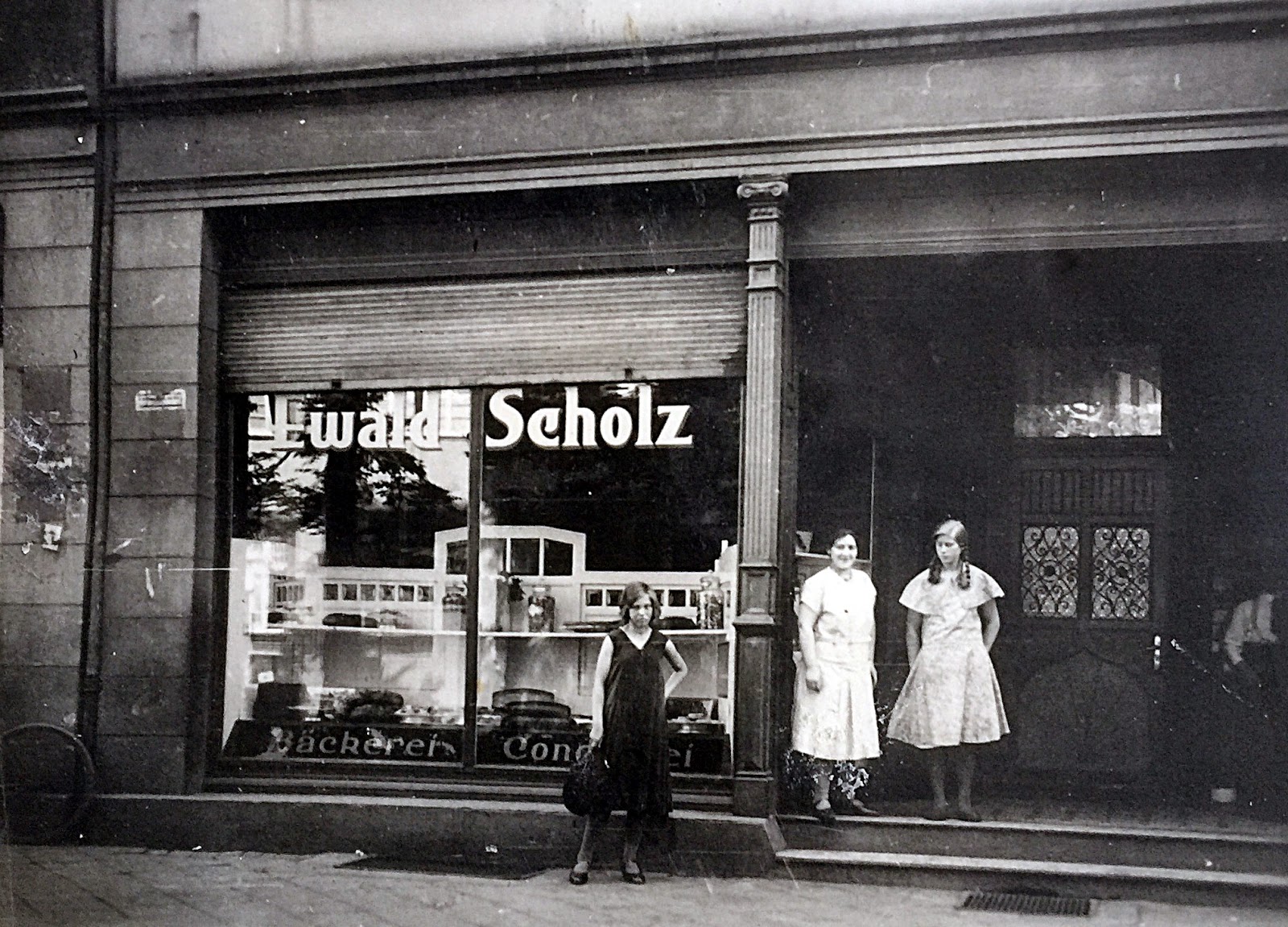 Meeting a Legend
by J.B. Blocker

Ewald Scholz brought elegance to the madness of perfection. Ask anyone. Perfectionist is always mentioned with his name.


He is energized and driven by the soul of hospitality. The great chef is 'Front of House', 'Back of House', and all points in between. He proved to be a mentor and guide from a young age. No detail escaped him. He lived his historic culinary carrier with a whip and a rose. I have seen it in the many ways.
He has traveled the world of cuisine like Marco Polo and then presented what he has learned with thoughtful elegance. He has influenced thousands and charmed thousands more.

I was visiting chef on a Sunday afternoon. We were standing on his back patio when the doorbell rings.
Chef Pete Nolasco and his video recorder have arrived. Without hesitation Chef virtually sprints across his living room, kitchen, and foyer to get to the front door. He doesn’t want the guest to his home have to wait to be greeted. His story is so big that a team has formed. Dotty Griffith and Gay Prewitt have joined Pete and myself to revel in the names and places that have been woven into his tapestry.
“This man is ’83, undergoing chemo, and he has been waiting on my every possible need since I had called him from the parking lot.”  I was 50 yards away, he had briskly walked to me to open the gate.  He sees to my seating and comfort like a grand maitre de. He allows me to make coffee because, I am the coffee guy! but still provides iced water and searches for other possible needs.
Much later, Chef Pete attempts to clear the table after a snack of perfectly chopped onions, thinly sliced salmon, a serving of mixed crackers and cheeses and a very nice wine. He curses, “Damn it! Leave that alone!” I mentioned this to one of his longtime friends a few days later who’s response is, “That probably offended him! He is the consummate host don’t you know!” 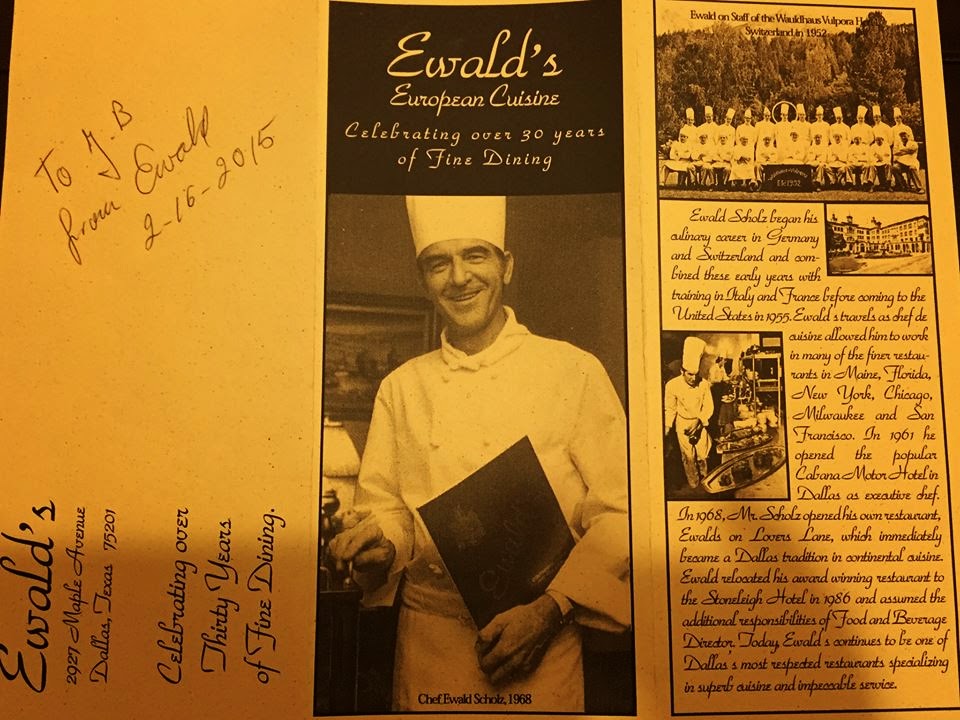 We had met a few other times but having only lived in Dallas for the past 24 years, I wasn’t part of his glory days. Actually, I was. I didn’t realize it until only recently.


My 1st fine dining experience was at the restaurant in the Stoneleigh Hotel. It was Ewald’s! And it was straight off the big screen movies of elegant dining in Paris or Vienna. It was the reason Chef Ewald Scholz is arguably Dallas 1st Celebrity Chef.

One of my best friends (crazy wealthy) was celebrating his SMU Doctorate and flew me in from Amarillo to join in. A special dinner for his closest friends was being prepared by a famous chef and Richard also had a room for me at the Stoneleigh. I arrived in time for diner and stepped into a movie scene. The tables were set with too many utensils. All the glasses, plates, and utensils, choreographed like a work of art.
I grew up in the panhandle. My big city was Lubbock and Amarillo. I have worked at the lumber yard, drove a tractor, and even worked a summer at the stockyard. Before that, my idea of fine dining was the Red Lobster and the Hoffbrau. I did not like wine. Mogen David or Mellow Days and Gentle Nights were what I had tasted.
But on that night, we had a Keyser Leibframilch Glockenspiel that was a revelation and then a Pine Ridge Cab that demanded smaller and smaller sips with air so the grapes inflated in your mouth..
I tasted my 1st caviar, there was a sliced meats and assorted cheese plate with fancy breads, my 1st Caesar Salad prepared table side, Escargot, Veal, Lobster Bisque, Lobster Thermador ( I knew I would have to have more),  a flambéed Dessert, and Dom Perigion. All were my first time to experience.
I had become a successful professional but hadn't spent it on dining experiences. Not that Amarillo was going to add adventure to my dining. This experience was eye opening. I was now ready to taste the world.
Since that evening I began to take in the experience of dining that couldn't be found at a church pot luck dinner.  For a while I especially ordered the Lobster Thermador if it was on a menu. It was never what I remembered. Of course, how could any dish stand on its own when you have to compare to a total dining experience?
All of these culinary 1st still resonate. I experienced fine dining at it's best because my wealthy friend’s mother wanted a special dinner of some of her son’s favorite dishes before he moved back to Amarillo, and she wanted Chef Ewald to prepare it.

Always keep in mind that every day, one or more people will sit at your table and may be experiencing a 1st.  Whether it is a chicken-fried steak, bbq, or the most elegant fare, it could be a lasting memory for good or for bad.
Can you accept the challenge that each opportunity for a host to give someone a memorable experience should not be missed?
Will someone like me be talking about it nearly 30 years later? This spirit of Pride in Hospitality is what drives the chefs it possesses.
It fuels men like Chef Ewald Scholtz.

Chasing History
Chef and I began talking more often before and after the Reunion at Reunion in 2015. His history is one of passing on his knowledge. The only way that Dallas dining could perform at the highest levels was to start the education process in Dallas.   The many acclaimed El Centro Culinary graduates can thank Chef for writing the first curriculum.
Executive Chef Herman Heimeyer of the Dallas Hyatt gave us the reigns to organize a gathering of many of Dallas great chefs and mentors. Over 25 culinary giants fueled the growing phenomenon of classically trained chefs. The culture of dining was being upgraded to dining elegance. Many chefs had migrated to DFW from hotels, resorts, and private clubs via Europe and have made Dallas their home.
With the help of Dotty Griffith and Gay Prewitt, the gathering was a culinary and historical success. Each of the guest was given time to share memories as it was videotaped.  Ewald could barely speak when the microphone was handed to him. Laryngitis that turned out to be cancer! But we all knew that he was the Begining of the conversation in Dallas dining.
In the begining, as Dotty would say, there was a steak, a big old baked potato, and salad with Thousand Islands. Maybe soup and fresh bread. It took not only skill, but also staffing to perform perfectly for every guest. This is what the European transplants like Ewald and Werner and Karl, and Ernst demanded for their guest. 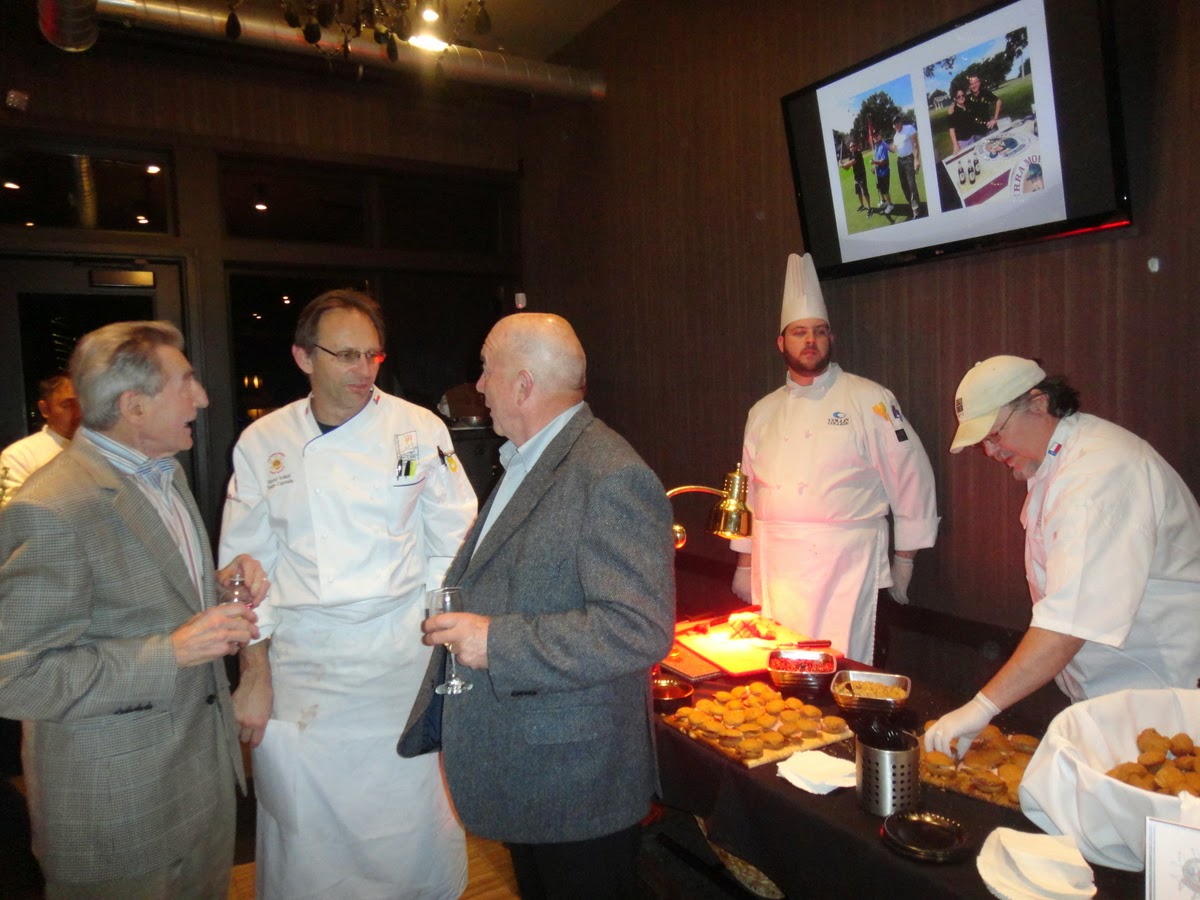 On the evening of the Epicurean World Master Chef Society Team U.S. A. farewell mixer not long after, Ewald is dressed impeccably and comes to me smiling as he warmly grasp my hands with those long fingers of an artist. They are strong and firm, yet gentle. They wrap around my hands like a hug. He leans toward me to apologize for his voice and tells me that the laryngitis that had hampered his moment to speak at The Reunion and has prevented us from meeting to work on his biography turns out to be cancer. He is apologizing?
I see his paleness as he explains that he has just undergone chemo that afternoon but would not have missed this. I watch him through the evening, I am seeing his grace, his elegance, and his stamina that come only from his heart. As we move around the 200+ gathering he is being treated with honor and is a favorite of all. They know what he means to their world.
He did not slow down. His spirit fuels his treatment and recovery.
The more I know of this man, the more I need to know!