You Can Always Learn

Behind his desk, Sheriff Keith Gary of Grayson County leans toward me and says, “You can quote me on this, I was wrong!” 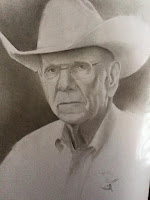 Let me introduce you to my friend Keith Gary.
Keith was a 5’7” former drum major in college and after graduation, an insurance agent. Somehow by fate, accident, or an act of God he found himself sporting the badge of a U.S. Marshall assigned to East Texas.
You can call Keith a conservative. He served under Nixon but resigned rather than serve under the Carter administration. With the election of Reagan, he was reappointed. When Clinton was elected, he resigned again and was again reappointed by Bush.
Now, truth be told, he might have been replaced or not. It doesn’t matter because he didn’t wait around to find out.
In 1996, he was urged to run for sheriff in a county that had never elected a Republican. He ran against a long seated incumbent and along with two other Republicans began a trend. In 2013, all 23 elected county officials will be GOP!
To say he is beloved in his county is a statement that I have found can be said for many long serving Texas Sheriffs. Keith is a gentle natured soul who displays courtesy and respect with the ease of a guardian angel.
As a matter of fact, as I sit across from him in his office, or attend his Rotary luncheon, or wander around with him. I am ever fascinated by his frankness as we get to know each other. I think of a younger George Burns. I want to stick a short, fat cigar in his hands and take a picture, but he is not going for it.
The G-Man Look

Sheriff Gary was just reelected for the 5th time and at age 77 has served some 44 years in law enforcement. He is spry and cheerful in the comforting way of a man who has seen it all and has learned ‘what not to get worked up over.’
For the last 16 years he and his staff had dressed like G-Men. Sports jacket, white shirt, and tie. It was what he knew. He was comfortable with that clean professional look.
Some of his officers had occasionally dropped hints of wanting to wear a Stetson with boots and jeans.  In the fall of this year, he called in his administration staff and detectives. “I had some discretionary funds available so I gave them the opportunity to go to the classic western look of boots, jeans, white shirt, and a cowboy hat and they jumped on the offer.” explains the sheriff.
“I didn’t buy myself a Stetson, but the guys pitched in and bought me a fine hat. I really didn’t expect to wear it often at all but I really appreciated the gesture and am proud to own this hat.”
As we mingled with Keith’s fellow Rotarians, I ask their opinion of the sheriff dressed in the western sheriff attire. They were big fans and we got a group ‘thumbs up’ photo.
When we returned to his office after running around the court house meeting other county officials including Keith’s son Brian who serves as a District Judge, we talked about the effects of this new (or rather old) sheriff’s attire.
“Deputies are reporting a great response with the public. I see now that in a suit and tie alone, my staff didn’t look like a Texas county sheriff, they looked like anyone in a suit.”
“But I tell you, Gary continues, I can also see it in the pride of my staff and frankly, I feel pretty good about it myself. I thought I might wear this look every once in a while  but I find myself getting dressed in the morning and thinking, ‘Now who am I going to be in front of’ and I end up putting on the boots and grabbing this fine white Stetson!”
The Moral?
I present to you a man who can stand before God and everyone else and say, “I was wrong!”
It speaks a lot for Sheriff Gary, an elected official with all the power that comes from his vast experience to still be learning but there is more than that. To some, saying they were wrong taste like vinegar, to the wise, it taste like the honey of learning something good.

Sheriff’s and Their Stetsons

Tom Maddox is the sheriff of Sabine County. 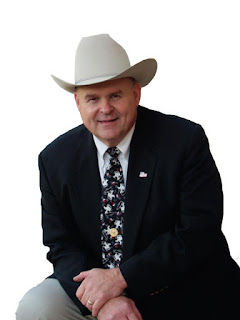 “My grandfather gave me my first boots and cowboy hat when I was 3 years old. I’ve been wearing them ever since! I believe that our Texas citizens respect the image of a sheriff with his boots and Stetson. But you need to remember your manners.
I recently was invited into a home and before I could explain why they should vote for me the homeowner stopped me. He said, “You already have my vote. The fellow running against you came knockin and I invited him in. Do you know he didn’t have the decency to take off his hat when he came in my home!”
Courtesy means a lot!”


Randy Brown is the sheriff of Medina County. 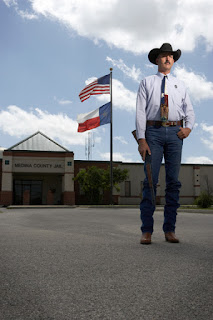 At 6 foot 11 inches tall before he puts on his boots and hat, Randy is very likely the tallest sheriff in the United States. A modest man, I talked to his deputies to get this little nugget.
Apparently, the sheriff’s staff often has lunch together. When they sit to eat they all remove their hats and pray before their meal. Many times someone comments that they appreciate seeing this Christian act from the sheriff and his staff. Someone questioned whether this was making a bit of a scene. The response!
“We are an Openly Christian department! I am not going to hide my faith. We promote and provide access to religious studies and services. We even have Wednesday evening services at our county jail. When you are in our custody, we will behave in a Christian manner.”


Bob Holder is the sheriff of Comal County. 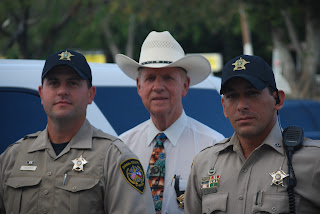 Bob has become one of my sounding boards. After 30 years as a Texas Highway Patrol officer and nearly 50 years of total law enforcement, he and his wife plan on travelling around on their Harley if he would be allowed to retire. He is another hugely popular Texas sheriff. Sheriff Holder has a deep resonant voice and an easy style that sounds like a voice God would use.
“I remember the day I became a Texas Highway Patrolman. I remember how proud I was when I put on that hat. To this day, it is my opinion that the hat with the badge is a symbol. It means something historic, sometimes heroic, and considered trustworthy.”
“My deputies are welcomed to wear their Stetsons with one exception. A law man doesn’t need to be fighting to keep his hat on in the wind when they are performing their duties. And they certainly don’t need to be chasing them! We had a good looking baseball cap made that they are also allowed to wear. Other than that, they need to been seen as a Texas Deputy Sheriff.”

Susan Pamerleau is the past Sheriff of Bexar County and a USAF Retired Major General. That's 2 Stars! 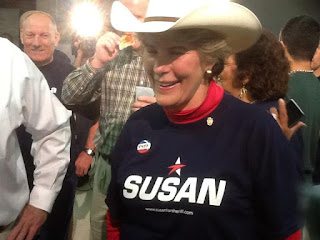 The newly elected sheriff had someone else hat put on her upon the announcement that she was the newly elected sheriff. This picture was taken. Susan is proud of this photo and what it represents.
"I respect the image of a Texas Sheriff and will also wear a Stetson when occasions call for them."
This lady ran her campaign on her extensive organizational skills!

Dan Law is the current Pres.of the Sheriff’s Assoc. of Texas and the sheriff of Caldwell County.

Sheriff Law is a big man! He could stand in a crowd of NFL linemen and fit in at 6’4” and a plus plus size.
“It’s funny how people respond to you when you wear your Stetson. What really stands out is how people you know respond to you when you don't wear it. They kind of don't respond at all.
As big as I am, I am amazed that people I know don’t recognize me in passing if I’m not in my Stetson. One time, I asked a friend why he didn’t introduce me to someone as the sheriff. His reply was, “You didn’t look like one!”


Writers P.S.
I put on my first stetson at age 15. My first job with a time card was at the Sunray feed yard. I’ve been wearing one ever since.
I am always amazed at how many friends pass by me in the streets and at social events when I am not wearing my Stetson. The governors security staff are used to me appearing at some of his public appearances with camera in hand and taking up close pictures. I showed up at one event hatless and couldn't get close.

On the other hand, like many of my sheriff friends we are often stopped by tourist especially at the airport and asked to be in a picture with them. Me, probably because my belt has star centered conchs. When one group of oriental tourist at LAX came up to me, I introduced myself as J.B. Blocker. “Oh Walker Texas Ranger” they sang out. No, no, that’s Blocker not Walker! “ Ah! OK, take picture now prease!”
I am the most comfortable and in my opinion often the best dressed in pressed jeans, polished boots, a white shirt, and my 30 year old Stetson.
The image works for me even without the badge. It becomes magical when you have that Star on your chest!

- J.B. Blocker is a media consultant and historian/biographer.
Posted by JB Blocker at 5:08 PM