I mentioned going to the Sheriffs Association of Texas Annual Convention to a great friend and well traveled businessman in New York City. Doug's response was, "When people think of sheriffs, no matter where they come from, they think of cowboy hats and boots, sidearms, and a badge with a Star. They think of Texas!"
by J.B.Blocker

The Lone Star Reporter featuring the diversity and history of Texas through the Eyes of Texas, the Sheriffs of the Lone Star State. With jb (The Caffeine Cowboy) on the road.


Texas has 254 counties. The diversity of the Great State is reflected by the industry, the topography, the range of population counts, and of course, THE SHERIFFS.
Brewster County borders the Rio Grande. It's the largest county in Texas and spans over 6200 square miles. You could fit Connecticut, Delaware, and Rhode Island into the county and have some spare room. Sheriff Ronny Dodson and his 8 deputies deal with border crossings, drugs, and the BIG BEND.
Rockwall County is the NE neighbor of Dallas County. Of the 149 square miles, 20 of that is a lake. Sheriff Harold Eavenson oversees one of the fastest growing populations in the country. It is the smallest county!
Harris County has a population that exceeds 4.1 million. It's the third most populated county in the country and Sheriff Adrian Garcia manages a staff of over 4000 to deal with one of the most diversified populations in the U.S.A..
Loving County might be better known as the setting for LONESOME DOVE. Sheriff Billy Hopper grew up in Loving and has a limited budget because the population just grew to 82 on the last census. It is the least populated county in America!
And let's not forget the booming and diversified population, numerous rivers and lakes, mountain ranges, the High Plains, the Hill Country, national parks, the bordering states, and Mexico. Did I mention enormous farms and ranches, forests, deserts, valleys, and the Gulf Coast? And how about more varieties of wildlife and weather than any other state. They all add to the complexity of law enforcement from county to county. Whether urban, suburban, or rural Lone Star Sheriffs have their own range of challenges.
Their height ranges from the Medina County Sheriff Randy Brown who stands around 7' 5"+ with his always present boots and stetson, to the diminutive Dallas County Sheriff Lupe Valdez who always wears her dress blues and stands plus or minus 5' 2".
As the host county, Dallas put on a show. This included tours of the Dallas County Jail and Cowboys Stadium. The massive Hilton Anatole Hotel was awash with boots, white hats, and side arms. The vendors ranged from specialized vehicles to the latest in technology.


Collin County Sheriff Terry Box has held his elected office since February 1985. He has served the county and the state with distinction.
This sheriff does not look like the typical Texas lawman. While many wear their Stetsons and side arms and are usually dressed in a white pressed shirt, blue jeans, and boots, this gentle and unassuming lawman dresses casually and unadorned.

“Heck, I have shown up in baggy shorts and a golf shirt to the conventions. Travel wear!” recalls the seasoned lawman. While most wear their boots and white stetsons, very few dress like civilians.
Normally, Sheriff Box wears dress slacks and a polo type shirt. He could more easily pass as a history teacher at the local high school.
When Terry Box took office, Collin County’s population was around 200,000. Now with the tremendous growth of Plano, Frisco, Allen, Celina, Fairview, Anna, Melissa, Princeton, Farmersville, and McKinney, the count is closing in on a million. It won’t be long!
The southern border catches a bit of Carrollton, Dallas, and Garland as well as parts of Richardson. In all, 31 cities and towns are inside the county’s border. An incredible blend of the newest urban developments and rural historic Texas can be experienced in Collin County.
Box’s Upholstery in McKinney was Terry’s fathers business. The one time president of the Sheriff’s Association of Texas was born and raised in McKinney.
After graduating from McKinney High, he began his career as a 19-year-old police dispatcher. He has dated his wife Rendy since he was a junior in high school, and they are still dating after 40 years.
“My wife is the kindest, most caring person I know," beams the sheriff. "I am sure she gets me more votes at election time than I do! When she goes shopping, she ends up buying things for others as much as for herself."
“When I was 21, I became a peace officer in Plano. I took the job because I just couldn’t see arresting people I grew up with and knew so well.”
Ten years later Terry was lured to the sheriffs’ office with a rank of Lieutenant and was the Deputy Chief three years later. After the death of close friend Sheriff Joe Steenbergen in 1985, Box was appointed by the Commissioners Court to complete the term and has been Sheriff Box ever since.
After a special election in ’86 where he faced four opponents, the Republican Party candidate has basically run unopposed ever since. It’s is no wonder!
Collin County’s sheriff has maintained an impeccable reputation that has led to special FBI training at Quantico and an appointment by Governor Bush for the Texas Commission on Jail Standards, where he became the chairman in 2000.
“Collin County is very fortunate to have a man like Terry Box as their sheriff”, claims Randall County Sheriff Joel Richardson.
“When Randall County built their new county jail, we decided to model it after Collin County. "Theirs was one of only two jails to successfully integrate a state of the art Direct Supervision Facility," he said. "His progressive style of management and his kindness, courtesy, and respect for human rights has helped me to see a different side of law enforcement and jail operations.   We sent our staff down to McKinney to train at their facility. Sheriff Box and his staff were so accommodating, and all of us were grateful and impressed with the leadership and their management style. When I started in law enforcement, I was part of the bag 'em and cage 'em mentality. Now, I see my job in a more humanistic light of protecting the rights of every individual.”
The Collin County staff takes in account that 'not all who are held in a county jail have been found guilty of their charges'. Many awaiting trial and held in custody are later found to be innocent. This facility and its staff helps maintain that consideration.
“The sheriffs’ senior staff views Sheriff Box as an inspiration with great ethics, and an approachable style of leadership that makes everyone strive to be a kinder, better person.” this from long-time friend Major Mike Anderson.
There isn’t enough space to list his resume of boards, directorship, accreditation's, and community service involvement. The modest sheriff doesn’t even list them on the county Web site like many others do.
Always early to work, he disdains being lazy or late but forgives others just as easily as he leads by his example. If you want to talk to the sheriff, just call early and he will most likely answer the phone himself.

His humanity showed itself in spades when he discussed the challenges of his border county brethren.
“They live a totally different life than I do! They have to fear for their staff, their families, and even their own safety every day. Not me!” In Lou Gehrig-type style he closed our interview with his appreciation for his family and his home.
“I am always aware that I am one of the truly lucky people to have a job I love, in a great county, and in my home town.”
The Sheriffs Association of Texas

“Each year there were are thousands of new bills filed with the Legislators and we go over the ones that passed and will effect our offices. Although many were minor, they still cover the many responsibilities that county sheriffs must understand. You have to know the law to enforce it fairly.” Terry Box

The more than 1,900 attendees include vendors showing all the hardware and the newest software that make law enforcement more efficient.

DPS, US Postal Service, Secret Service, were just some of the many that made this annual event the largest gathering of law enforcement in the state.

This is a family convention. Not just the brother/sisterhood of sheriffs, but the week includes events for wives and children to help bond these officers of the law. The cultural diversity of Texas is on display!

Sheriff Box explains: “You learn as much in the hallways and at the dinner tables about how each of us performs our duties. We discuss how we succeed and even how we have failed in order make us better public servants. The training is outstanding and we find ourselves humbled by the different challenges each of us face.

"There is the huge population growth like Collin County, there is the protecting land mass with mostly rural population (some counties have less than 2000 population with a lot of open land to protect), there is the terror of the Border States, and then you add the millions who reside in Houston and Dallas counties to mix up the requirements to perform our jobs. It’s a great week that I always look forward to.”

Join the Sheriffs Association of Texas!

For a $25 annual fee, you can become an Associate Member of the Sheriffs Association of Texas. Along with the membership card and decals, you receive the quarterly magazine with real stories of Texas Sheriffs. You also help contribute to funds for fallen officers and you support the 7 scholarships awarded every year to encourage new law enforcement officers. The Web site is www. txsheriffs.org is worth looking at, and pay special attention to the fallen officers’ memorial and the scholarship funds. 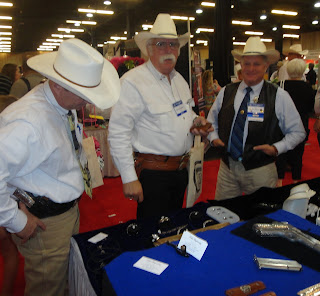 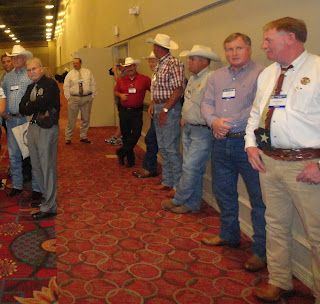 - J.B. Blocker is a media consultant based in Collin County in North Texas. Advertise with J.B. by calling 469-334-9962. Email: jbnorthtexas@gmail.com
Posted by JB Blocker at 1:28 PM