isplaying Reunion at Reunion v3.docx.
Living among us are keepers of the flame!  Who truly understands the spark that ignited that inner fire? That spark which gave way to a young vulnerable flame. The flame that, when properly fostered, ignited into a raging inferno of desire capable of driving a person to a lifetime of the extraordinary?

Who among us is
equipped to predict when that passion, born of a creative young mind growing up in Germany, Austria, Switzerland or France, ultimately decides to settle in the most unlikely place a world away?
That is exactly what happened in the span of several years stretching from the mid-70s to the mid-80s when a disparate group of chefs, each trained in the art of European cuisine and fine dining inexplicably relocated to Dallas, where they spawned a culinary revolution that reshaped and molded the Dallas food world.

“They came into Dallas at a time when fine dining was a big ole’ T-bone, a loaded baked potato, and an iceberg lettuce salad,” says Dotty Griffith, former food editor for the Dallas Morning News.
“I became food editor in 1978 and that was when Dallas was really starting to enter a new age of cuisine. I can’t imagine the culture shock they must have experienced, most of them having come from Germany, Austria, Switzerland or France, and many of them had traveled much of the world in their training."


More than thirty years later,
many of those pioneers of the culinary world whose talents helped transform Dallas into one of the best dining-out cities in America, were brought together for a truly magical reunion. Dubbed the Reunion at Reunion due to its location—on the terrace of the Hyatt Reunion in the shadows of Reunion Tower—the event brought together the influencers, the men and women who shaped Dallas into the top dining-out city in America. 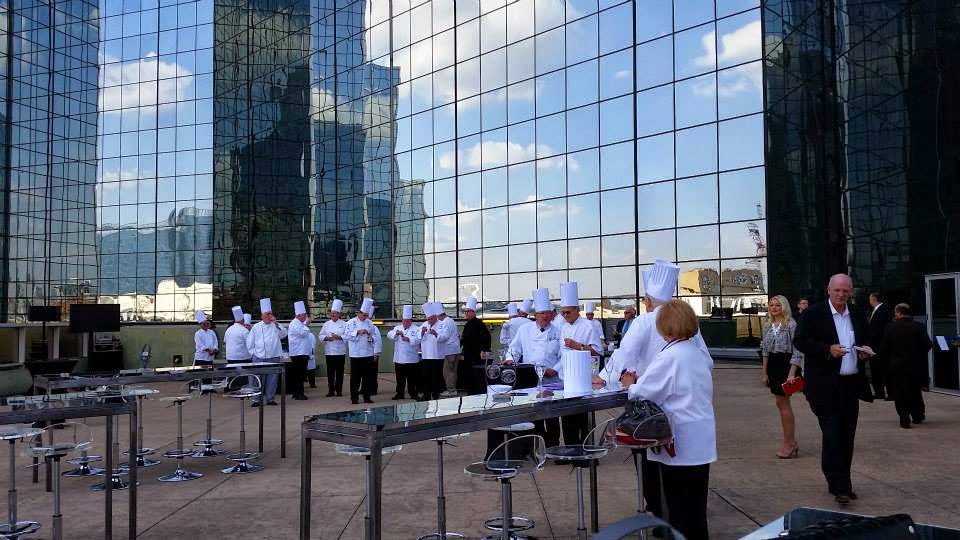 “We look at Dallas now, and it’s the Number One dining out city in America. It’s all due to the quality of chefs and the food and the wine and the support of all these people,” adds Lucian M. LaBarba, whose family business, FreshPoint Dallas (originally American Food Service), has been one of the more influential players in the growth of the Dallas food industry. “Eating out has become a sport in Dallas, Texas. And we’re very proud to have been a part of that.”


Organized by James “JB” Blocker, known as the Caffeine Cowboy, Reunion at Reunion was an intimate event, more private than the exclusive clubs included on the collective resumes of the chefs in attendance. Twenty chefs, along with three others donning the title of honorary chef—nearly one thousand years of collective experience—finally gathered at one location for photo ops, a retelling of their life journeys, and to engage in the sort of fellowship that only they can understand, all while being served extraordinary fare put together by Hyatt Regency Dallas at Reunion Executive Chef Hermann Hiemeyer.


“Seeing all these guys here is simply amazing,” Blocker said. “It truly is. I mean, these are the guys who helped shape this town. People don’t know that but Dallas is what it is due to these guys. You  have no idea how much they influenced the local culture we have today.”


It’s hard to argue with the Caffeine Cowboy on this point. These chefs arrived at a time when Dallas was changing, attempting to brand itself as a true world-class city.


“In the early 80s if you weren’t European and you weren’t classically trained, you weren’t going to be a chef in Dallas,” said Robert Bifulco, Executive Chef and Program Chair of the Culinary Arts curriculum at Remington College in Garland, one of the honored attendees.


The lineup of chefs in attendance, those who are credited with the transformation of the Dallas fine dining scene includes:


Chef James Deibel remembered the great Chef Jean LaFont. Jim began at OZ at age 17 as the only American among a kitchen full of French chefs. He carries on the great chefs legacy as he left the mixer to prepare a purely classic LaFont menu at one of Dallas great mansions for a private dinner.


Each guest of honor was given an opportunity to stand before the audience and recount his or her culinary journey.
The stories, which dated back as far as World War II, told tales of the most humble beginnings working on produce carts, sandwich counters, and more. For these chefs to all end up in a place like Dallas around the same era reinforced what J.B. Blocker had been telling everyone prior to this event, that the Reunion at Reunion was more than amazing, it was historic.


“It’s a privilege and honor seeing all of you today,” Hiemeyer said during his speech. “We all appreciate each other for what we’ve done in the community and the hospitality field.”


“Again, this group of people truly transformed Dallas. To see this much talent in one place at one time leaves me speechless,” Blocker said. He wasn’t the only one feeling sentimental.


“I would say that after fifty-one years, this is a highlight, coming here,” said Chef Klaus Mittlehauser, who came to Dallas to work at the prestigious Dallas Fairmont Hotel, considered at the time of his arrival the city’s finest hotel, where celebrities and dignitaries stayed and dined.


The Reunion at Reunion will hopefully spark more similar events, something Blocker hopes will expand to other cities.


“It’s so important for people to understand who these great chefs are and what sort of influence they’ve had on our region. They have all done so much for me and I want to give something back to them because they deserve it.”