Liver and Onions for Mom


Liver and Onions? There was no escape when mom made liver and onions for dad. No excuses and no substitutions. As an adult, I no longer hate them.
I ate lunch at Furr's Cafeteria in Plano on I-75 this weekend. I filled my plate with things my mom would have made. It's kinda like going to a Sunday pot luck dinner. I fill my plate with some of my childhood least favorites boiled cabbage, turnip greens, broccoli salad, jello salad, etc.. If they had Salmon Patties it would be complete. The meal is saved by a slice of roast beef, baked fish, and an average meatloaf. My mom's meatloaf became average when a former secretary Shiela Williams blew my mind.  I make a point to get a nice helping of liver and onions smothered in the gravy. Some times throughout the year I go to Furr's with a friend, but at this time of year, I make to point to go on my own and take my time talking to my mother.
Nancy Lea passed 20 years ago but continually rides on my shoulder. For those who knew her at Church of Christ. She was a Texas small town Martha Stewart and Barbara Walters rolled into a dust bowl Okie, WWII Wave, and author. 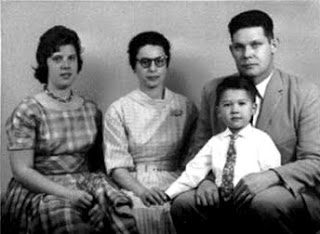 I was her adopted Japanese, Irish, German, Korean, French personal project. No racism existed in her world. Cultures did. She embraced the world. We had friends from around the world from Navy days. When we reached America, for most of my childhood the only other 1/2 Asian I would know was my baby sister Eri.
Mom owned a pottery and craft shop in our tiny town of less than 2000. Because of the Handicraft Shop in Sunray, I have committed knitting, crocheting, sewing, cooking, baking, cleaning, pottery, pouring molds, firing them off, painting Roosters and Pitcher/Bowl sets, macrame, and every other art or craft known to man in the '70s. I have read the Bible thoroughly, many times, as well as the dictionary, and encyclopedia. She made me read Lord Byron, Thoreau, Shakespeare and tested me on them.

Nancy Blocker collected all of her Bible notes, lessons, maps, and drawings to publish Pearls in the Sand. She also hand wrote three cookbooks. She was proud of her penmanship and calligraphy.  I can easily read a book in a day, and because she convinced me that my brain would not explode, I still have 3 or 4 books going at a time.

I am proudly OCD and a library resides in my head because of MOM.
I was sitting on the front porch this morning reading a historic western and listening to Con te Patiro by Andres Bucheli, which I am trying to learn. Because my mom drove me 40 miles twice a week for years to a voice teacher, I can sing arias in German, Russian, and many in Italian.
Sometimes I feel her flick the back of my ear as she would often show disapproval. She didn't chastise me openly, but that flick was a signal that we would be talking about this later. And that I was probably going to have some new Bible verses to memorize...

So every Mother's day weekend, I make sure to have some liver and onions at the Furr's with mom.
- J.B. Blocker is a media consultant based in Collin County in North Texas. Advertise with J.B. by calling 469-334-9962.
Posted by JB Blocker at 3:16 PM