HOW LAWS GET CHANGED

What a Texas Lady! 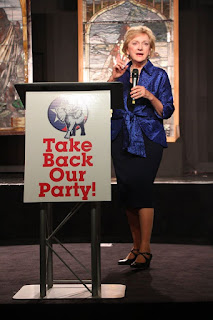 “Lisa Hendrickson's perfect combination of grit and intelligence now protects every other Texas holder of concealed handguns from unintended consequences. Add Lisa's grace and humility and she's a wonderful candidate for Chairman of the Denton County Republican Party. I'm most honored to support her.”
Cathie Adams  President, Texas Eagle Forum

Joshua is 15 years old. His mother is about to teach a valuable lesson in bravery, leadership, and how the system is supposed to work.
Over a 6 month period from Feb. 24th to Sept. 1st of 2015 he and his family witnessed the wheels of legislative change up close and very personally. But first he would have to watch as his mother set off alarms and gather the attention of DFW airport’s security.

Lisa Hendrickson and her son had caught a break. The politically active mother from Denton County was taking her teenager to Washington D.C. to participate in CPAC. The Conservative Political Action Conference for 2015 featured a who’s who of the nation’s GOP leadership. It convened on the 26th for three fully scheduled days.
They had to really rush to catch an available flight 7 hours earlier. They scrambled to pull everything together and the family of four got to DFW where Jon (dad) and big sister Julianna had dropped them off.
When the alarms went off at the security check point, it very quickly dawned on Lisa that her purse with a side zippered access held her hand gun!

Since I have never kept a hand gun in a purse, it hadn’t occurred to me that ladies who are CHL holders regard their gun like they do their wallet or cell phone in a way. They don’t really think of it until they need it. In fact when I asked over a dozen respected and politically active lady friends about it, every one of them could have seen this happen to them. By the way, more law abiding women are detained for a gun in their purse than any other group!

It didn’t take long before Joshua and Julianna were watching their mother being arrested. Julianna is the Ukrainian born 20 year old who became a Hendrickson at age 15. She had bad memories from her homeland that made the arrest of her beloved mother very hard to take.


Lisa is a licensed gun holder in the State of Texas. It would seem logical that she should have been allowed to return it to her car. Or in this case, just give it to her husband to take home.

But that was not the way the law had been drafted. It need changing and everyone knew it.
HR554 had been languishing in the Texas House since 2011 but because it effected very few in relation to other laws, it couldn’t get the traction to make it to a vote.
That was about to change. The All-American, gun toting activist was about give it some traction! She would pull out the tire chains, make calls, inform, and follow through.
By May, HR554 was passed by the House 139-0. Then SR554 also passed on Sept.1st, 2015!

THE IRONIC WAY A LAW WAS CHANGED 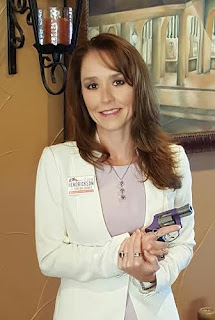 A politically active mom and her son are headed to the annual CPAC when the trip gets derailed by 19 ½ hours of jail time. It seems that about 4 times a week someone at DFW Airport is arrested for taking a firearm to the security check point. As the state of Texas saw an increase in hand gun licenses, the number of arrest also grew. Even elected officials were not exempt from the 3rd Degree felony and up to $10,000 fine.
All along the path from arrest, to jail intake, to her final release, the key and nagging common ground were the constant statements from everyone. They became an echo. “It happens all the time!  That’s the law!”
“Well, it’s a stupid law!” was running through Lisa’s head.
So what would you do if your trip to engage in a Political Action Conference was interrupted by arrest due to a silly law that left no margin for legality or intent?
The Hendrickson’s were not to be deterred from attending the conference! Lisa and Joshua made it to the conference! Instead of being 2 days early, they made it on time.  And when they returned, our north Texas mom was fired up and ready do something about it.

Her first call was to the office of her State Senator Jane Nelson. She followed up with a call to the Texas State Rifle Association).
“Lisa Hendrickson’s experience turned an unfortunate incident into an opportunity for successful activism. Without her passion HB/SB 554 could not have passed. She’s a spark plug for action and right thinking. We told her the steps she should take and the people she should contact. She took it from there!”
Alice Tripp, Legislative Director, Texas State Rifle Association.
House Passes HR554 (139-0)

Thank you Lisa
Our elected officials do not gain magical powers once they are elected. They are chosen to be the voice for their constituents. Their ears and eyes are the public. Unless a bad or unfair piece of legislation is identified and brought to their attention, they won’t know about it. Their job is to listen and then take action to find a legislative solution with the help of their peers in Austin.
Lisa’s unfortunate arrest was one of around 200 at DFW in the past year. It would seem that after hundreds of arrest and 4 years on the drawing boards of congress that this law change was not only simple, but it was logical, and long overdue.
It took one person who followed the provided procedures to make not just her case, but all the hundreds of others who would have continued to have their lives wrongly and painfully subjected to a bad law.
It took an example of active leadership!

WHY DO I BELIEVE I AM THE BEST CANDIDATE FOR CHAIR - Here is my response...
“I represent a positive direction for the party as it relates to energy, personality, and with a proven track record of successfully working with the different demographics from all over Denton County.
Furthermore, I will be the bridge that grabs hold of the generation that has gone before us and will continue reaching out to the generation that is coming up and unite them.
My skill set brings a diverse background of marketing, public relations, fundraising as well as politics that better suits me to serve the population with a heart dedicated to empowering and inspiring our voters to work together and unite behind a common conservative cause - our Constitution.